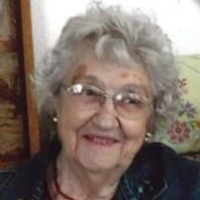 Memorial Mass will be held at 11:30 on Monday, April 29, 2013 at the Church of St. Peter in St. Peter with burial at Calvary Cemetery, St. Peter. Visitation will be one hour prior to the service at the church. St. Peter Funeral Home is assisting the family with arrangements.

Helen Theresa was born on April 21, 1923 in Le Sueur MN to Albert and Anastasia (Mager) Hoffmann She graduated from Le Sueur High School in 1942 and went on to the Golden Valley Nursing School in Minneapolis. She then worked for the St. Peter Community Hospital, where she met Clifford Mollert. They were united in marriage on June 2, 1946. She was active in the Church of St. Peter including the choir, funeral choir, church thrift store and was a charter member of the Catholic Daughters. She also sang in the St. Peter Community Choir and helped for 25 years at the St. Peter Area Food Shelf. She loved antiques and in 1976, she and Clifford began Shanaska Drummer Antiques on the Century Farmm and continued in that business until retiring in 1999. T was an active member for 24 years of the St. Peter Questers, Minnehaha Chapter 111 which is the oldest antiqueing group in the United States. She was also an Avon Representative for 15 years, Charter member of the Hallmark Keepsake Ornament Club and enjoyed traveling to visit family.

She was preceded in death by husband Clifford in 2012 and a daughter, Mary Ellen Mollert-Wenzel.
To order memorial trees or send flowers to the family in memory of Theresa Mollert, please visit our flower store.