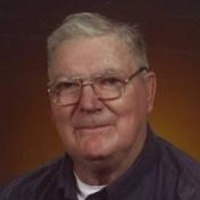 A Memorial Service will be held at 11:00 a.m., Wednesday, April 16, 2014, at Our Savior's Lutheran Church in Cleveland. Visitation will be two hours prior to the service at the church. St. Peter Funeral Home handled the arrangements.

Henry was born September 13, 1933, to Theodore and Helen(Boldt) Kewatt in Kilkenny Township. He graduated from LeCenter High School in 1953. He married Sandra Sack in 1956. They later divorced. Together they had 5 children. On September 9, 1978, he married Jeanette Fetch at St. Johns Lutheran Church in Kilkenny. He worked for Miller Motors then 28 years at Dotson Foundry in Mankato. He later worked for All American Pressure Washers in St. Peter until he retired in 2000. Hank loved fishing, camping, family and jig saw puzzles. He had a special bond with his dog Dakotah.

He was preceded in death by his parents; son, Steven; daughter, Maria; grandsons, Jeremy and Tyler; sisters, Elvira Schnoor and Phyllis Kewatt; brothers, Orville and Theodore; one sister-in-law and four sons-in-law.

To order memorial trees or send flowers to the family in memory of Henry A Kewatt, please visit our flower store.