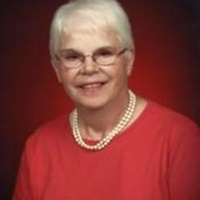 Dorothy Hughes, age 77 of St. Peter, died on Saturday, April 19, 2014 in Mankato after years of dealing with COPD.

Funeral Service will be held at 11:00 am on Wednesday, April 23, 2014 at Norseland Lutheran Church in Norseland with Pastor Craig Ferkenstad officiating. Burial will be in the church cemetery. Visitation will be from 4:00 " 7:00 pm on Tuesday at St. Peter Funeral Home " Klein Chapel with a prayer service at 7:00. Visitation will continue one hour prior to the service at the church Wednesday.

Dorothy was born on March 6, 1937 in St. Peter to Clarence and Cora (Knutson) Rodning. She graduated from St. Peter High School in 1955 and was united in marriage to Robert Hughes on November 26, 1955 at Norseland Lutheran Church. She worked at ADC, was a waitress at the Holiday House and did clerical work at Minnegasco before moving to West Virginia and completing her working career as a transcriber. Dorothy was a member of the ladies aid at church and the American Legion Auxiliary. She enjoyed traveling, playing piano and cards.

She was preceded in death by her parents: Clarence and Cora; husband Robert in 1978; siblings: Kenny, Warren and Carolyn (John) Rine.
To order memorial trees or send flowers to the family in memory of Dorothy Hughes, please visit our flower store.