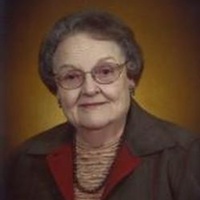 Funeral Service will be held at 11:00 a.m., Saturday, June 14, 2014 at Trinity Lutheran Church, St. Peter with Pastor Bob Iverson, officiating. Visitation will be from 4:00 " 7:00 p.m., Friday, June 13, 2014 at the St. Peter Funeral Home and will continue one hour before service at the church on Saturday. Interment will be in Green Hill Cemetery, St. Peter.

She was born June 7, 1925, in York, Nebraska. Her parents, Pastor John and Helen Beckmann (Zeilinger), lived in Albion, Nebraska. She was baptized at the Zion Lutheran Church in Albion by her father. Later, she also was confirmed and married by her father in the same church.

She began her teaching career in 1946 at Bancroft, Nebraska. There, she taught English and Vocal Music for three years. That's where she met her future husband, Howard Mickelson, who was the principal. They married June 13, 1946, and resided in Bancroft until 1950.They had two sons, John Howard and James Fredric. John was born in Albion and James in Chadron.

They then moved to Chadron, Nebraska, where Howard taught at the college for seven years. They were charter members of Chadron's Immanuel Lutheran Church. Rosemary was the church organist there and also directed the junior choir. While in Chadron, she served as the State Scholarship Chairperson of American Association of University Women (AAUW).

In 1957, the family moved to St. Peter, Minnesota, where Howard worked for Gustavus Adolphus College for 13 years. For seven of those years, he was the Resident Head of Sorenson Hall. Rosemary also worked part-time at GAC supervising student teachers. They were members of Trinity Lutheran Church where Rosemary provided music for Sunday School for seven years, conducted the junior choir for a year, served on the church council twice, and worked with the Lutheran Church Women (LCW) for many years. She also was the church organist at the Episcopal Church in St. Peter from 1971-1982

In 1964, she became a member of the faculty at Independent School 508-St. Peter where she taught English for 26 years. She retired in 1990, but remained very active volunteering at both of St. Peter's care centers, reading essays for Scholarship America, and serving on the board of the St. Peter Education Foundation. She was extremely grateful for the many awards and public commendations she received over the years, highlighted by her recognition as Nicollet County's Outstanding Senior Citizen, Outstanding Region 9 Senior Volunteer, and her upcoming induction into the St. Peter School District's Hall of Fame.

God's Speed"
To order memorial trees or send flowers to the family in memory of Rosemary Mickelson, please visit our flower store.