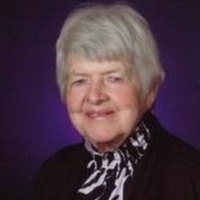 Funeral service will be held at 3:00 pm on Sunday, July 13, 2014 at First Lutheran Church in St. Peter with Rev. Alan Bray officiating. Burial will be at the Mound Cemetery, Le Sueur. Visitation will be one hour prior to the service at the church. Memorials may be directed toward the Gustavus Adolphus College Arboretum. St. Peter Funeral Home ~ Klein Chapel is assisting the family with arrangements.

Helen Verna Block was born on October 16, 1916 in Decoria Township, Blue Earth County to Charles and Martha (Johnson) Fredrickson. Grades 1-8 were spent at the Iron Bridge School and she graduated from Mankato High School in 1934. On July 12, 1944 she was united in marriage to John Block in Winthrop, MN. They lived in St. Peter and Helen worked for 10 years as a dental assistant for Dr. G. Edward Larson. She later worked in food service at the State Hospital before working as the Head of Housekeeping at Gustavus Adolphus College. There she had replaced her mother, Martha Fredrickson, in that same position and would ultimately retire in 1985 after a rewarding career of 35 years.

On October 12, 1991 Helen was united in marriage to Joseph F. Volk in St. Peter. She was active at First Lutheran Church in various womens groups and was an avid supporter of the Gustavus Adolphus College Library and Arboretum. Helen enjoyed gardening, bowling, traveling, reading, having coffee, music, animals and spending time with her grandsons.

Left to remember Helen are her children: Winthrop "Windy" (Diane) of St. Peter, Winthro (Minda) of Montevideo, Grant of St. Peter and Euzetta (Simon) Williams of Santa Barbara CA; grandsons: Travis of Faribault, Justin of St. Peter and Adam (Melissa) and their children Parker and Grayson all of Prior Lake; and step children: Sue Munson of St. Peter and Tom (Jane) Volk of Lexington KY and Toms daughter Brigid (David Nussbaum) Volk of Fridley, MN. She was preceded in death by husbands John (1978) and Joseph (2006); infant son Garrett (1950); and brother, Edward (1991).
To order memorial trees or send flowers to the family in memory of Helen V Block, please visit our flower store.