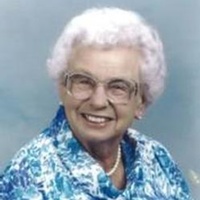 Mass of Christian Burial will be at 11:30 am on Tuesday, January 22, 2013 at the Church of St. Peter in St. Peter with Fr. Phil Schotzko officiating. Burial will be at Calvary Cemetery, St. Peter. Visitation will be from 4:00 " 7:00 pm on Monday at the church with a prayer service at 6:30pm. Visitation will continue one hour prior to the service at church on Tuesday. St. Peter Funeral Home is assisting with arrangements.

Evelyn was born to Edward and Matilda (Langer) Stangler on Sept. 7, 1917 in St. Peter, Minnesota. Evelyn was a graduate of St. Peter High School. She married Mathias H. Schaus on Oct. 12, 1938 at St. Mary's Catholic Church, in St. Peter. They lived in St. Peter for 33 years where they raised their two sons, then moved to a home on Lake Washington.

Evelyn worked for ADC Products as an assembly worker in radio hardware and as a stock clerk until July 1972. She was a member of the Church of St. Peter.

Evelyn enjoyed volunteering at her church, fishing, active in the Mankato YMCA water aerobics and fitness, but her passion, being outdoors gardening.

Evelyn was preceded in death by her husband Mathias (Matt) in 1989, her parents, one sister Grace McCarthy, one brother Glen Stangler and two daughter-in-laws Irene Schaus and Nancy Schaus.

Special thanks to all the caregivers at Ecumen Sand Prairie and Benedictine Living Community, over the last four years.

To order memorial trees or send flowers to the family in memory of Evelyn L Schaus, please visit our flower store.