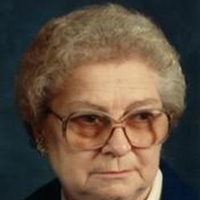 Esther Sampson, age 90 of Franklin and formerly of St. Peter, died on Tuesday, February 5, 2013 at the Golden Living Home in Franklin.

Funeral service will be held at 11:00 am on Friday, February 8, 2013 at St. Peter Funeral Home " Klein chapel with visitation beginning at 10:30. Burial will be at 3:00 pm on Friday at the Union State Line Cemetery in rural Jackson, MN

Esther Bertha was born on March 14, 1922 in Estherville, IA to Percy and Theo (Grinde) Carrison. On September 20, 1937 she was united in marriage to Marion Sampson. They lived several places in Minnesota and owned motels in both Dassel and Willmar. She was also a member of the Waverly Lutheran Church in rural Trimont. Esther enjoyed quilting, baking, making clothes, collecting salt and pepper shakers, and taking care of others.

She was preceded in death by her husband in 1991, two brothers, a sister and daughters-in-law, Cindy and Ruby.
To order memorial trees or send flowers to the family in memory of Esther Sampson, please visit our flower store.