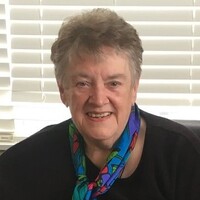 Arlene Raye Hilding died peacefully on October 14, 2022. Born December 18, 1937 to Louise and Victor Anderson, Arlene was baptized and confirmed in the Lutheran faith. She developed an early interest in music and became a church organist, accompanist, and chamber musician during her school years. She graduated from Duluth East High School, and from the University of Minnesota, Duluth. Arlene married Stephen Hilding in 1958 and served as organist in several churches while her husband pursued graduate degrees in mathematics. As a couple, Arlene and Stephen, a cellist, enjoyed studying and performing chamber music. During the years of busy family life, Arlene continued pursuing her interest in music and in 1969 she spent the summer at the American Organ Institute, Freiburg, Germany. She earned a Master’s degree in 1972 from Mankato State University, and later received grants from the Institute of Liturgical Music, the Netherlands in 1975 and the Belgian Ministry of Culture in 1976 to study pipe organ design, construction and performance. Arlene was a member of the music faculty at Bethany Lutheran College, Mankato, from 1968 to 1997. An active recitalist, she engaged in study and performance in Denmark, Germany, France, Switzerland, the Netherlands, and Belgium. Arlene treasured time with family and friends. She loved learning and embracing all the wonders of creation. Arlene was especially delighted when one of her grandchildren shared a new perspective for her to ponder. She found meaning and special joy in practicing and performing, analyzing scores with her music theory students, and coaching young musicians. Arlene will be fondly remembered by her four children, Elena, Mark (Laura), Gregory (Karen), and Jonathan (Juli); ten grandchildren, Benjamin (Alicia), Stephen (Anne), Derek (Alison), Kyle, Austen, Chelsea, Jake, Kathryn, Victoria (Danny), Sam; four great grandchildren, Miriam, Joanna, Molly, Eliza; sister, Camilla Weinstock (Jim); brothers, Erland (Gloria), Fred (Sandra); sister-in-law, Cecile Swenson (Richard); and many dear nieces and nephews, cousins and former students and colleagues. Arlene was preceded in death by her husband of 60 years, Stephen.

The family would like to thank the staff and residents at Praha Village in New Prague, for their wonderful care and friendship.

After a private burial, a Memorial Worship Service will be held at Holy Trinity Lutheran Church, New Prague, MN at 11 a.m. on November 5, 2022. Saint Peter Funeral Home is assisting the family with arrangements.

To order memorial trees or send flowers to the family in memory of Arlene Raye Hilding, please visit our flower store.