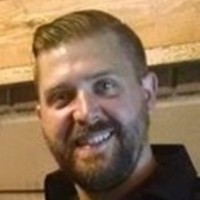 Cody was born to Amber and Michael Spiess on February 2, 1986 and raised in St. Peter, MN. He graduated from St. Peter High School in 2004. He was a goal tender for the Bulldogs Hockey from a young age through high school. He was passionate about biking, skiing, customizing cars, engines, motorcycles, bikes and camping.

Cody worked in the bike shop at Scheels in high school and college where he met his now wife Ingrid in 2005. Cody attended South Central College and graduated with an Associate Degree in Automotive Technology. During his schooling, he was introduced to Elysian Automotive Service, in Elysian, MN and became an ASE Master Certified Technician working there for the next 10 years, leaving due to his illness. Cody was also a big part of the Mankato Area BMX from a young age, getting his father and children to race with him. He served as a board member for 15 years, two of those years being the track operator.

Cody and Ingrid married May 14, 2011. Together they enjoyed many camping trips and BMX races. They grew their family with their first born son, Jari in 2014 and then Otto in 2016.  They belong to Trinity Evangelical Lutheran Church in Smiths Mill, MN.

Cody was diagnosed with Creutzfeldt–Jakob disease (CJD) the day before his 33rd birthday, February 1, 2019. He surpassed every normal range in true Cody form and lived over a year from being diagnosed. Cody was called to heaven with family by his side on March 27, 2020.

He was preceded in death by his grandparents: Harold & Beverly Engesser and Stephen & Shirley Spiess; and maternal great grandmother Grace Engesser.

A special thank you to the staff and volunteers at Mayo Clinic Health Hospice for their compassionate care. A memorial service will be held at a later date. Memorials may be given to the National Prion Disease Pathology Surveillance Center in Cody’s name.

To order memorial trees or send flowers to the family in memory of Cody S. Spiess, please visit our flower store.