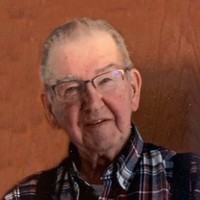 Conrad was born February 24, 1927 in Minneapolis to Fred and Cora (Scholl) Peterson. He was raised on a farm near Norseland where he worked until his early 20s. In 1949, Conrad moved to California for a job opportunity and was introduced to Nina “Lita” Baugher. They were married on February 28, 1950 in St. Peter. As newlyweds, Conrad and Lita made their home in St. Peter, and he began working as a garment cutter for Johnson’s Overall Factory. After they closed the business, Conrad worked as a custodian at the Nicollet County Courthouse until retirement in 1990.

In his spare time, Conrad enjoyed traveling throughout the United States, spending time with his grandkids, and visiting the casino. One of Conrad’s greatest strengths was the ability to create something to solve a problem. He was a handyman who could fix anything.

He was preceded in death by his parents; son, Gary Peterson; brother, Louis Peterson; and sister, Lillian Seitzer.

To order memorial trees or send flowers to the family in memory of Conrad "Connie" W. Peterson, please visit our flower store.