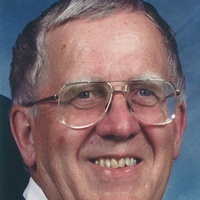 David V. Harrington, former Professor of English at Gustavus Adolphus College, died Tuesday, April 16 at Ecumen Prairie Hill in St. Peter. He was 89, and had lived with Alzheimer’s disease for more than a decade.

He was born Oct. 29, 1929 to Glen W. and Gladys (Cewe) Harrington in Plainview, Minn., the fifth of six children. The family moved to Stewart, Minn., in 1939 and to the Spokane, Washington area in 1946. He graduated from West Valley High School in Millwood, Washington in 1947 and from Eastern Washington University in 1951, where he was a distance runner and four-year letterman in track. He served in the U.S. Army from 1951 to 1954, studying Russian at the Army Language School in Monterey, California.

He earned a master’s degree in English at Washington State University in 1956 and a doctorate at the University of Wisconsin in 1960. He taught literature and writing at Gustavus from 1960 to 1988. He especially enjoyed teaching the works of Chaucer, Shakespeare and Milton, publishing articles in academic journals and discussing them with other scholars.

He met Aleda Mae Rehm, his great love, in graduate school at Washington State and married her Aug. 25, 1957 in Salem, Oregon. They were married almost 62 years.

David loved singing in church and community choirs and madrigal singing groups and in later years played the euphonium in the Minnesota “Over 60” Band. He was an enthusiastic jogger for more than 30 years; after he gave up running, he was known for his daily walks around town.

He was a key member of the St. Peter Library Committee that established a new public library after the old one was destroyed by the 1998 tornado.

David is survived by his beloved wife, Aleda; two daughters, Ann Harrington of St. Paul and Linda Christian (Chris), of Blanco, Texas; a son, Bruce Harrington (Elizabeth), of St. Paul; and granddaughter, Clare Harrington, of St. Paul. His other surviving relatives include a sister, Phyllis Miller, of Willmar, a brother, William Harrington (Mary), of Moses Lake, Washington, and many nieces and nephews.

A sister, Betty Hedtke, two brothers, Jack Harrington and Tom Harrington, and a son-in-law, Joe Walsh, preceded him in death.

To order memorial trees or send flowers to the family in memory of David V. Harrington, please visit our flower store.