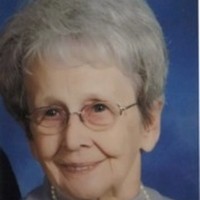 Betty was born March 7, 1931 in Mankato, Minnesota, to Robert and Elizabeth (Wilmes) Miller.  She attended school at St. Peter and Paul’s School and Loyola High School, graduating in 1949.  After graduation, she was employed at Mankato Citizens Telephone Company until 1952.  She was united in marriage to Earl (Sonny) Meyer of St. Peter on November 8, 1952, and moved to rural St. Peter, where they farmed in Traverse Township.  They retired in 1991 and moved to St. Peter.  She worked part time at Hardware Hank, and later, at Swedberg and Soderlund Drugs.

She was an active member of the Church of St. Peter, doing volunteer work; and was a member of the Catholic Order of Foresters of Nicollet County.  She enjoyed sewing, playing cards, going to her grandchildren’s sporting events and spending time with family and friends.

She is survived by her husband and three daughters, Barb (Rick) Wright of St. Peter, Cindy Meyer (Steve Widmer) of LeSueur, and Sandy (Jeff) Baker of New Buffalo, Michigan.  She has four grandchildren, Jenny Erickson, Katie Buell, Bradley Baker and Nicole Boelter.  She also has six great-grandchildren, Keith, Sam, Hannah, Jackson, Levi and Karsee.  One sister, Loretta Nourie, of Nicollet, and her parents preceded her in death.

To order memorial trees or send flowers to the family in memory of Elizabeth "Betty" Meyer, please visit our flower store.