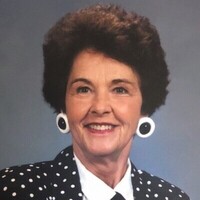 Mass of Christian Burial is at 11:00 am Friday, September 4th at the Catholic Church of St. Peter, St. Peter, Mn.  Visitation is at 9:30am.  Burial will be at Calvary Cemetery, St. Peter following the service.

Jean was born May 7, 1932 in Mankato, Mn. to Harry and Mary Baker.  On June 23, 1951 she was united in marriage to Richard Germscheid at Marysburg Church in Madison Lake, Mn.  Later they divorced.  Jean graduated from Good Council Academy in Mankato, Mn.  Jean then went on to become a wonderful Mother of seven children.  Baking was her passion, always serving special family dinners.  She was a master cook!  Jean worked at the Dahl House for many years both in Mankato and Red Wing.  Fashion was a passion for Jean.

Jean’s love of God was deep in her heart. She served her church in many ways; singing in the choir, and most importantly as an Eucharistic Minister.  Jean’s children, grandchildren, and great grandchildren meant the world to her.

To order memorial trees or send flowers to the family in memory of Jean M. Germscheid, please visit our flower store.