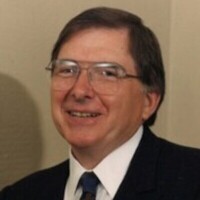 John Howard, of St. Peter, died Sunday, May 17, 2020. Memorial Mass will be 11:00am Saturday, July 17, 2021 at the Catholic Church of St. Peter, St. Peter with visitation at 10:00am. Lunch will be served. Memorials are preferred. Condolences for the family can be left at www.saintpeterfuneralhome.com.

John was born to Frank and Mary (Gilles) Howard in 1929 in LaCrosse, Wisconsin. His early schooling was in LaCrosse and then St. John's in Collegeville MN where he became a monk, teacher and priest until 1977. He then furthered his education at universities in the US and England. John did publications and editorial work in the Twin Cities until 1985. He then worked as the Retreat/Conference Center Director at St. Paul Priory, followed by the coordinator of older adult education for the city of Bloomington until 1990. John married Judy Pedersen in 1988 and they moved to St. Peter in 1990 . He worked as a therapist for Le Sueur County Mental Health Center until retirement.

To order memorial trees or send flowers to the family in memory of John Howard, please visit our flower store.