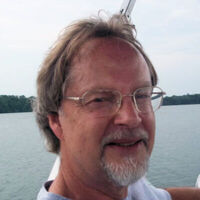 Funeral services are 11:00am Friday (9/24) at St. Peter Evangelical Lutheran Church in St. Peter, MN, with a private burial later this fall at Fort Snelling National Cemetery. Visitation will be at 9:30am Friday at church. A livestream of the service can be found at www.facebook.com/saintpeterlutheranchurchandschool .

Larry was born February 25, 1947 in Red Wing, MN, son of Burnette and Eleanor Duden. His grandparents were young children when they emigrated with their parents in the 1870’s from Germany and Sweden, settling in Goodhue County, Minnesota. His parents were the first generation of their families born in the United States and were raised farming.

He was baptized April 22, 1947 by Pastor Rodney Hansen. Sponsors were Phyllis (Duden) Stumpf and Ralph Fick. He was confirmed at First English Evangelical Lutheran Church in Cannon Falls, MN on June 10, 1962 by Rev. Boyd C. Nelson.

During the Vietnam Era Conflict, Larry served in the US Army Security Agency. Important to Larry was the fact that also serving during the Vietnam Conflict were his brother Roger Duden and 5 cousins: Myrle, Dale, Daryl, Doug, and Duane Duden. Larry received an honorable discharge from the United States Army on July 27, 1973 after 3 years of active duty.

With his education from college and special training in the Army, Larry worked for more than 30 years in Information Technology as a project manager, which always involved challenging problem solving. Among his many projects was the Y2K conversion for Wells Fargo.

Larry was united in marriage to Karen L. (Kittelson) Bruflodt on April 25, 1998 at the Como Park Conservatory in St. Paul, MN.

Larry retired in 2008 from Wells Fargo. He enjoyed being active in his church, volunteering at the St. Peter Food Shelf, and spending time with his family. Being a loving, supportive husband, father, and grandfather were important to him. He took great pleasure in photography, drawing, gardening, travel, going for walks, playing the trumpet, and listening to music. He also enjoyed attending local events, such as the Rock Bend Folk Festival and the Nobel Conference at Gustavus Adolphus.

Larry liked to keep life simple. He approached life knowing it was not meant to be easy, but he enjoyed the journey and found comfort and joy from the blessings and promises received from the Lord.

To order memorial trees or send flowers to the family in memory of Larry A. Duden, please visit our flower store.