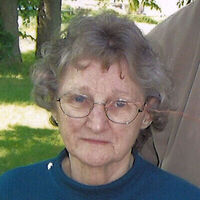 Private family services will be held. In leiu of flowers, memorial are preferred to an organization of the donor’s choice. Condolences for the family can be left at www.saintpeterfuneralhome.com, or sent to 807 Bassford Street, St. Peter MN 56082.

Marlene Rose was born November 2, 1936 in New Ulm to Edwin A. and Mary V. (Weier) Heck. She attended St. Mary’s Catholic School through the 8th grade and is a 1954 Graduate of New Ulm Public School. She met James Brown on a blind date and the two were later married on March 17, 1962 in Norfolk VA at the Navy Cathedral. They lived several places while Jim was in the Navy; having their daughter, Christine, in Norwich CT in 1963. They eventual moved back to MN after Jim was discharged and settled in St. Peter in 1973. She was eventually employed at Onan, retiring in 1999. She loved baking and was known for her humor and quick wit. Most important to her, was family.

To order memorial trees or send flowers to the family in memory of Marlene Rose Brown (nee Heck), please visit our flower store.