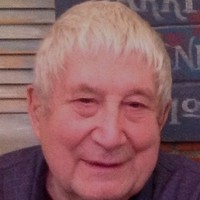 Melvin was born June 5, 1927 in Lura Township to James Earl and Marie Anderson. He graduated from Delevan High School, top of his class in 1945. Melvin enlisted in the Army and was stationed in Stuttgart, Germany where he met the love of his life, Adele. They were married in Stuttgart, September 22, 1947. They had their first child, Bill in August of 1948 and shortly after moved back to Melvin's hometown of Delevan.  Together, they moved to Arizona where he worked for a short time for the Sante Fe Railroad. From there they moved to Milwaukee where he completed coursework at the Milwaukee School of Engineering. He worked as an electro technician until he moved his family of five back to Delevan in 1957. In 1962 they moved to Mankato, Minnesota to work for Schwickerts. He retired from there in 1989.  In 2008 they sold their home in Mankato and moved to St. Peter, MN.

Melvin was a man of few words. He loved books, woodworking, solving puzzles, and SWEETS! If he wasn't reading you would find him in his workshop making something to give away. He was also our fix it man because he truly could fix anything.

He was a wonderful man and will be dearly missed!!

To order memorial trees or send flowers to the family in memory of Melvin Franklin Anderson, please visit our flower store.