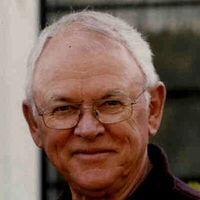 Merton Robert Wenner, age 89, of St. Peter, MN passed away on June 24, 2021 surrounded by family.   Mass of Christian Burial will be held on Monday, June 28 at 11 a.m. at the Church of St. Peter in St. Peter.  Visitation will be held from 3 to 6 p.m. on Sunday, June 27, and one hour prior to service Monday at the Church.  Burial at Calvary Cemetery.  Lunch will follow at the church.  St. Peter Funeral Home is assisting the family with the arrangements.

Mert was born on February 8, 1932, to Wendell and Anna (Hiniker) Wenner.  He was raised in Mapleton, MN, prior to moving to St. Peter.  He graduated in 1950 from St. Peter High School.  Mert served in the Army from 1952 to 1954.  He was stationed in Pusan, South Korea, with the 91st Military Police Battalion.  Mert married his high school sweetheart, Margaret Johnson, on June 27, 1955, at St. Mary’s Church in St. Peter.  They had six children:  Teresa, Steven, Bradley, Lisa, Douglas and Ann.  Mert was a dedicated and innovative farmer his entire life.  He was an active member of the Church of St. Peter, serving on the finance council, singing in the choir, and as a Eucharistic minister.  He was a trustee and received the Bishop’s Medal of Service.  He proudly sang in the St. Mary’s Men’s Choir.   Mert served on the St. Peter School Board (1971-1983), First National Bank MN, Traverse Elevator and the St. Peter Chamber of Commerce.  He was a member of the Knights of Columbus and American Legion.  He enjoyed spending time with his family, roads trips in the family motorhome, woodworking, fishing, hunting, golfing, bowling, and playing cards.  He had a special place in his heart for his grandchildren and great grandchildren.   “For when they are in my presence, all my cares and worries seem less” (Mert Wenner).

To order memorial trees or send flowers to the family in memory of Merton R. Wenner, please visit our flower store.