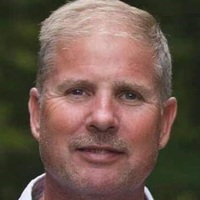 To honor Mike's wishes a private memorial service will be held at Trinity Lutheran Church in St. Peter. Public Celebration of Life will be held from 3-7 p.m. on Saturday, November 6, 2021 at the Cleveland Fire Department. St. Peter Funeral Home is in charge of arrangements.

Mike was a man driven to pursue his passions. He carried a deep love of life itself, but he would tell you his biggest accomplishments was being a husband, father and Papa. Mike and Lathea’s love story began as high school sweethearts and on September 30th, 2021, they celebrated their 43rd wedding anniversary. His family meant more to him than anything else in the world. When he spoke about his children it was impossible to miss the intense pride that he felt for each of them. Mike had a way of making sure his children and their families had every opportunity available to them and taught them to enjoy every moment life has to offer.

In 1997 Mike & Lathea moved their family from St. Peter to Cleveland, MN. Shortly after the move, he became of service to his neighbors and joined the Cleveland Volunteer Fire Department. In 2000 he and his wife became even more connected to the community when they purchased the local BP Gas Station. Here they employed many of the town’s high school students and more through their 14 years in business. It was here that Mike became known by many as the friendly face always welcoming them at the start of their day. Mike continued to serve the community as a fireman for 18 years until his retirement in 2017.

As Lathea put it, “I don’t think there is anyone who knew Mike, who didn’t know he loved racing.” While his family was his heart, sprint car racing ran through his veins. At 16 years old he followed his father’s footsteps by getting in the driver’s seat and began his racing career in St. Peter. Through the years his family and friends often accompanied him to the track, helping him in the pits or cheering from the stands. His passion for the sport extended beyond just driving. As quoted from a 2004 news article: “I’m going to be a grandpa in a couple of months,” Mike said, “And we know he’s a boy, so I’ve already told my daughter, Nichole, that I’ve got this little kart that I’m going to be picking up for him. She just said, ‘Oh my God!”” His sons, Dustin and Kyle, inherited his love of the sport and he supported them from early on. From racing karts and later when they took their own turn behind the wheel of a sprint car, he was their coach and number one fan. Well after Mike hung up his driving suit, he continued to be an influence within the dirt track community, helping many drivers behind the scenes. The countless friendships rooted in dirt became some he held nearest to his heart, often referring to the years spent driving for the Ediger family as the glory days. Mike is survived by his wife of 43 years, Lathea; children, Nichole (Kevin) Bloom, Dustin (Michelle) Sargent, Kyle (Courtney) Sargent; grandchildren, Aiden and Henry Bloom, Mason, Matthew, and Maddox Sargent, Makinley Sargent; parents, William Sargent, Janette Sargent; mother-in-law, Melva Leonard; siblings, Terry Sargent, Robin Sargent, Will (Ann) Sargent and Tami Sargent; brothers-in-law, Richard (Shari) Hoffman, Lynn Hoffman, Merle (Shelly) Hoffman, Mark Hofffman, and Darwin (Amy) Hoffman; sister-in-law, Leatta (Curt) Sisler, as well as many nieces, nephews, and friends.

The Sargent family will forever continue to be grateful to the Cleveland Fire Department and community for their love and support through this difficult time in their lives. They would also like to extend their appreciation to the Mayo Clinic Health System Hospice Team for their incredible care.

We try to find peace in knowing that if it hurts this deeply for us to love someone, that we were also blessed with the gift of loving them equally as deep in life. We know we wouldn’t choose to trade one second of the love and joy that Mike brought into our lives to relieve the pain we feel today. He is truly missed.

To order memorial trees or send flowers to the family in memory of Michael "Mike" John Sargent, please visit our flower store.