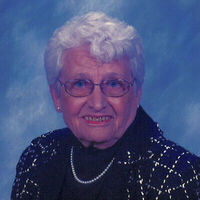 Born June 9, 1922 to Charles and Rosella Schleeve in LeSueur County. She attended country school and graduated from Cleveland High School. She married Mac McKee November 17, 1943. She then lived in Ashland, OR. While Mac was stationed at Camp White , Oregon. She worked for the USO and The Red Cross. She returned to Minnesota when Mac was shipped to the South Pacific. There she worked in Minneapolis at a defense factory.

After Mac's discharge, they lived in the Cleveland area. Mildred worked  at the Spoors Company, Dr. J. M. Dobie, and St. Peter State Hospital as a dental assistant.

Mac died in 1975 and Mildred later married Joe Loffredo in 1977. They traveled to Florida for the winter. After Joe died, she moved to St. Peter. Millie enjoyed bowling, playing bridge, fishing, watching the Vikings and Twins, bus trips with her friends and making pies. She was known as the 'Pie Lady' to the Cleveland school bus drivers.

Millie was a life long member of the Cleveland Church of Christ. She also was a long time member of Cleveland American Legion Auxiliary.

The family would like to thank the staffs at Ecumen Sand Prairie, Prairie Hill Memory Unit and Ecumen Hospice  for their great care of our mother.

Funeral services will be held at the Cleveland Church of Christ Thursday, May 27th, with visitation at 10:00am and services at 11:00am. Burial and lunch to follow. St. Peter Funeral Home is assisting the family. www.saintpeterfuneralhome.com

To order memorial trees or send flowers to the family in memory of Mildred L. McKee Loffredo, please visit our flower store.