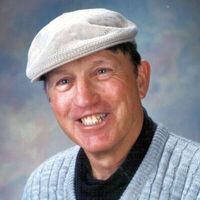 Richard Keith Gardner of Oshawa Township, Nicollet County, Minnesota died Monday, March 7th, 2022 under hospice care in his own home, just over a month after he was diagnosed with a very rare and aggressive cancer (NUT carcinoma).

Known as “Dick” to most, he was born during the Great Depression on May 19th, 1933, in a hospital located on the floors above what is now “Patrick’s on Third” bar in St. Peter, MN. He departed this world South 77 degrees, 01 minutes, 36 seconds West, a distance of 8,448 feet from the point of his beginning, in the beautiful second floor sunroom of the house he proudly designed and built. From the North-facing window Dick could see the site of the farmhouse he grew up in, located 385 feet away on land his father purchased in 1924.

Dick graduated St. Peter High School in the class of 1951, where he was an essential part of the track, wrestling, and football teams. In football he earned a position on the All-Conference first team his senior year. After high school, sponsored by the Knights of Columbus, Dick also represented St. Peter in the Upper Midwest Golden Gloves boxing tournament in Minneapolis.

Dick began at Gustavus Adolphus College the Fall of 1951, but when approached by Bolton & Menk founders Martin Menk Jr. and John Bolton Sr., he became the company’s first full-time employee on November 1st of that year. Thus began Dick’s lifelong career of over 68 years as a land surveyor, working year-round outside in Minnesota weather from age 18 to 86+ and with enduring loyalty to Bolton & Menk, Inc. Dick is to land surveyors what Paul Bunyan is to lumberjacks – the stories of Dick’s surveying exploits extolling his unreal athleticism, dedication, work ethic, and knowledge read like tall tales.

Dick married Joyce Rohloff of rural Henderson on May 26th, 1962. When son Troy and then daughter Kari were born, Dick threw himself into the task of being a father with the same maximum effort and dedication he devoted to his work life, leaving very little time for sleep in between. An avid music lover who played harmonica and button accordion by ear, he passed that love of music along to his kids, who both became professional musicians as a result. Trips to the Twin Cities for music lessons became a regular occurrence, a minimum of twice a week for at least 11 years straight. He was often out of the house by 5 a.m. and sometimes not home again until midnight, taking his work with him so he could do drafting while the kids were in their lessons.

Dick was a mentor, teacher, and second dad to many both at work and outside of it, teaching countless kids such skills as how to ride a bike, ice skate, or overcome whatever adversity they were facing. Whatever it was, Dick would figure out what needed to be done, and how to best teach someone to do it. Fathers would seek to sign up their sons to be a part of Dick’s surveying crew, not just as a summer job but as a character-building lesson in hard work and perseverance. Dick and Joyce also became second parents to Henrik Nyberg from Sweden and Nikolay Kitsul from Russia. They and their families will forever be members of Dick Gardner’s family.

Dick was preceded in death by his parents and siblings. He is survived by his loving wife Joyce, children Troy and Kari, by so many to whom he’s been a second father or mentor, and by all those whose lives he touched. To his family and to many who knew him, he will always be nothing less than Superman.

A service of remembrance and celebration of life will be held from 12:30pm - 4:30pm, with a service to be held at 1:00pm on Sunday, May 22nd, 2022 at the Minnesota Square Park Pavilion, St. Peter. Please come prepared to share your memories of Dick, or at least prepared to listen to some very true tall tales.

To order memorial trees or send flowers to the family in memory of Richard Keith Gardner, please visit our flower store.