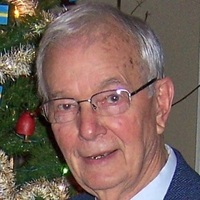 Robert "Bob" Isenberg, aged 92, of St. Peter departed this life in mid-August, surrounded by his loving family. Memorial service is 11:00am Saturday, September 25, 2021 at First Lutheran Church, St. Peter with visitation at 9:30am. The church’s COVID-19 safety protocols will be in effect. A livestream/video recording of the service can be accessed at saintpeterfuneralhome.com. In lieu of flowers, memorials are preferred to the Gustavus Arboretum or a charity of choice.

George Robert Isenberg Jr. (Bob) was born in Lafayette, MN to George Robert Isenberg Sr. and Esther Mathilde Isenberg (Johnson) on February 17, and baptised on April 11, 1929. He was a graduate of New Ulm High School and earned his Bachelor of Arts degree from Gustavus Adolphus College. Bob served in the Korean war as a Sgt(t) from 1953 to 1955.

Upon finishing basic training in 1953, Bob married Leona Isenberg (Walter), his wife of nearly 68 years. Together they raised daughters Naomi (David Quimby) and Lisa (Philip Friedlund) and made a happy home on their acreage just north of Lafayette. During these years, his contributions to the community included serving as chair of the New Ulm Hospital Board, president of the Lafayette Lions Club and commander of the Lafayette Legion, as well as membership in Rotary, Shriners and Masons.

After Bob retired from his position at the AMPI Regional Office in New Ulm, he and Onie moved into a newly constructed condominium development in St. Peter. Shortly after the move the infamous St. Peter tornado of 1998 destroyed a large swath of St. Peter, including their development. At that time Bob was president of the condo association. He provided steady leadership during a stressful time of rebuilding.

Bob and Onie enjoyed their St. Peter years full of travel, elder hostels and volunteering for the Gustavus Arboretum, Meals on Wheels and Vine. Bob enjoyed attending the St. Peter Lions meetings and, as an advocate for the arts, he joined Onie as an active member of their church choir and the St. Peter Choral Society. He was chief lefse flipper when he and Onie demonstrated lefse making in a variety of settings. Bob especially enjoyed fun times with grandchildren Linnea Quimby, Gustaf Friedlund, Sonja Quimby and more recently, honorary granddaughter Sanjeeda Shutrishna.

Bob was preceded in death by his parents and sister Blanche Pergol.

To order memorial trees or send flowers to the family in memory of Robert "Bob" Isenberg, please visit our flower store.