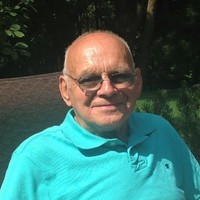 Robert Evan Johnson, of St. Peter, died peacefully on November 25th, 2019 at the age of 88 with his family surrounding him. He was a man rooted in faith, family, farming and fun.

Robert was born on August 10th, 1931 and was the middle son of Chester and Lena (Renneke) Johnson. He grew up on a farm in Nicollet County and graduated from District 6 and Gaylord High School in 1949, where he was a standout football player and ran the mile in track.

Robert married the love of his life, Corinne Rodning, on October 20, 1951 at Norseland Lutheran Church after spending most of the day harvesting in the fields.

They moved into an apartment above Swenson's Norseland General Store while Robert drove truck for them. He loved to recount stories about his driving routes to the Twin Cities when he hauled eggs for the store.

In 1953, Robert and Corinne moved to Norseland Eastview Farm, where they milked 32 cows, raised champion Hampshire pigs and chickens and grew corn, soybeans, alfalfa and wheat.

Robert's hands were evidence he was a hard worker on the farm but he always made time to be there for his seven children. He would milk the cows at all hours of the night in order to go to his children's sporting events. He and his wife put thousands of miles on their car to watch their kids participate. They even earned a lifetime pass to Nicollet High School home sporting events.

Robert loved his extended family, too. Known as "Bud" and "Uncle Bud" to his in-laws and nieces and nephews, he often cut the boy's hair in the back entry of their house.

Robert was committed to his community and served on the Scandian Grove Church Board and Cemetery Board for 19 years, the Nicollet School Board, the Land O'Lakes Regional Board and helped start the Nicollet County Pork Producers.

Robert was quick-witted and clever, always ready for a joke or a laugh. You could often find him lingering after church on Sunday, visiting with a friend or neighbor. He loved a good bowl of popcorn soaked in butter, shared with his kids or an episode of Johnny Carson. And he never said no to a bowl of ice cream, even licking the bowl clean.

After retiring from farming, Robert devoted himself to visiting and following the activities of his children, grandchildren and great-grandchildren around the country. His pride for his family was evident with every birth, baptism, confirmation, graduation and wedding.

Robert and Corinne spent more than 68 years together and became each other's physical and mental support in later years. It seems only fitting that they would both pass into eternal life together, surrounded by those who loved them. Corinne died just one day before her beloved husband.

He was preceded in death by his brother Gerald.

Visitation will be Monday, December 2nd from 4-7 PM at the St. Peter Funeral Home. Funeral services will be at 11 AM on Tuesday, December 3rd at Scandian Grove Lutheran Church.

The family would like to thank the staff at Mayo Mankato Hospital for their exceptional and compassionate care of Robert in his life and impending death.

In lieu of flowers, donations can be made to the Jonathan Zierdt Cancer Fund, Scandian Grove Lutheran Church or to the donor's charity choice.

To order memorial trees or send flowers to the family in memory of Robert Evan Johnson, please visit our flower store.