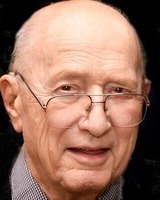 On February 23, 2021, Robert Allen Kant, of St. Peter was called out of this veil of tears to his eternal home at the age of 91 years, two months, and ten days.  A funeral service will be held at 11:00 a.m., on Saturday, February 27, 2021 at St. Peter Lutheran Church, St. Peter, MN, with visitation two hours prior at the church as well. A committal service will be held at a later date in Greenhill Cemetery, St. Peter, MN, where his mortal remains will be laid to rest until the resurrection from the dead. St. Peter Funeral Home is assisting the family with arrangements.

Robert Allen Kant was born December 13, 1929 in Milwaukee, Wisconsin, to Walter and Emily Kant.  Robert was baptized in the Christian faith at Saint Lucas Lutheran Church of Milwaukee on January 12, 1930.  He was the fourth of five children.  He attended St. Lucas Lutheran Elementary School and was confirmed in May of 1943.  Robert attended Bay View High School in Milwaukee, graduating in 1947.  Enlisting in the US Navy in late 1948, Robert specialized in aerial photography.  He was assigned to the US Naval Reserve for a while, but recalled to active duty during the Korean War, serving as an aerial photographer in Squadron VU-7 at North Island Naval Air Station, at San Diego Harbor, California.  He was honorably discharged in 1952 and completed his obligations to the USN Reserve in September 1953.

Robert attended Concordia Lutheran Seminary in Springfield, Illinois, to study for the ministry.  Robert married Irene Sidlik in 1956, a marriage blessed with six children.  Robert continued his studies at the Wisconsin Lutheran Seminary in Mequon, Wisconsin, graduating in May 1959. During his years as a pastor, Robert served congregations in Altura, Caledonia, Sanborn, Rockford, Butterfield and Darfur, all in Minnesota, and served as a chaplain for The Lutheran Home in Belle Plaine, MN.

His wife Irene failed in health and died in the Lord in May 2004.  The next year Robert met Roxie Dunham.  They were married in September of 2006 and made their life together in Saint Peter.

To order memorial trees or send flowers to the family in memory of Robert Allen Kant, please visit our flower store.