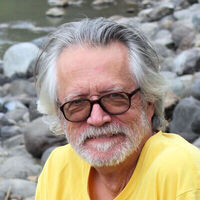 Robert E. Pillers Jr, age 70 of St. Peter and formerly of Clinton IA, passed away at home with family on Sunday, January 17, 2021.

No services are being held at this time. Memorials can be made to Trinity Lutheran Church, St. Peter.

Robert was born August 18, 1950 in Clinton IA to Robert Sr. and Lucille (Steege) Pillers. He was raised in Clinton and then attended Valparaiso University in Valparaiso IN, graduating with a bachelor’s in accounting and business. Robert was united in marriage to Beverly Taylor in Clinton on June 18, 1977. He worked producing and selling his own pottery for over 20 years and later spent time in Nicaragua training and mentoring artists. He traveled to Paraguay, Indonesia, Philippines, Tanzania and other Central American countries building small ceramic water purification filter factories in underserved areas. Robert was a member of Trinity Lutheran Church in St. Peter and enjoyed music and playing guitar, cars and collecting Studebakers, reading, was a social justice activist and being part of his grandchildren’s lives.

Left to remember Robert are his wife, Beverly; daughter, Loehrl (Alvaro Aburto) Pillers; grandchildren, Logan and Skyler Aburto Pillers; brother, Jon (Bonnie) Pillers; sister, Carolyn Dobler; and many nieces and nephews. He was preceded in death by his parents.

To order memorial trees or send flowers to the family in memory of Robert E. Pillers, Jr., please visit our flower store.