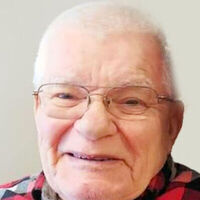 Memorial service will be 12:00noon Monday, December 20, 2021 at River of Life Lutheran Church, St. Peter. Visitation will begin at 10:30am at the church. A livestream of the service can be found with his obituary at www.saintpeterfuneralhome.com. In lieu of flowers, memorials are preferred to: St. Peter American Legion, Mayo Hospice or to donor’s choice.

Russell was born January 26, 1936 to J. Edwin and Eunice (Gessner) Johnson. He attended District 27 Country School and later 9th-11th grade at St. Peter High School and graduated from Waseca Ag School. He enlisted in the US Army, serving from 1954-1956. In July of 1958 he married Judy Anderson. Together they had 3 daughters: Lori, Terri and Tammi. They later divorced. Russell then married Vivian Lager and they had twins: Julie and Jason.

Russ worked for his neighbor, Chester Gustafson doing farm work dawn to dusk for $5 a day. He farmed the family farm for many years before moving to Judson and ultimately, St. Peter in 1964. He then worked various jobs including: Lorentz Trucking, The Creamery, 22 years for the St. Peter Street Department, Standard Gas Station, 11 years for Year Round Cab, carpentry for Norm Lager, and Trucking for Johnson Aggregate; through all those jobs and into retirement, he helped his friend, Donnie Dallman with farming. Russ enjoyed summer and winter fishing, wood working, playing cards, and traveling to Wisconsin. Most of all he enjoyed being outdoors and on the farm when he could.

He was preceded in death by his parents; wife, Vivian; brother, Don and sister, Phyllis Preston.

To order memorial trees or send flowers to the family in memory of Russell "Russ" Oliver Johnson, please visit our flower store.