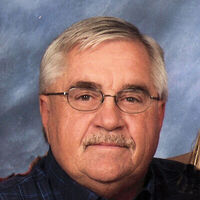 Russell “Russ” Gregory Serbus was born January 18th, 1949 in Olivia, MN to George and Martha (Schneider) Serbus. He grew up in Olivia before the family moved to Waldorf, IA, eventually coming back to Franklin, MN where Russ would go on to graduate in 1967 from Franklin High School. He was drafted into the US Army on February 20th, 1969 and honorably discharged on February 8th, 1971. He attained the rank of E5 and was the top marksman in his platoon.

He was united in marriage to Suzanne Angermeyr on October 27th, 1973. To this union Jennifer was born. Russ attended Willmar Community College and finished college at South West State University studying accounting. Russ was employed as the CFO of Marcus Construction for 12 years. In 1990 Russ started his own business developing software programing for farmers, which he later sold. In 1993 Russ, Sue, and Jennifer moved to their current home in Cleveland, MN. Russ ended his accounting career as the CFO of Midwest Assistance Program in New Prague, MN where he worked from 1993 until his retirement in 2008.

Russ was very involved with his church in Olivia, Willmar, and St. Peter serving on the finance committee of the parish counsel. Russ had a great love for the outdoors. He enjoyed fishing in Canada, hunting deer in northern MN, hunting pheasants and geese in southern MN and Iowa, and Elk hunting in Colorado with his brothers and friends. He enjoyed many summers with his family at the cabin. His most treasured time was spent doing Grandpa daycare for his 3 grandchildren.

Left to remember Russ is his wife of 48 years Suzanne, daughter Jennifer and son-in law Kyle Leonard, and grandchildren Mackynzie, Kaleigh, and Kole Russell. Russ is also survived by his four brothers and one sister, Dean (Dawn) Serbus, Rodney (Betty) Serbus, Brian (Pat) Serbus, Curt (Belinda) Serbus, and Paulette (Steve) Nohava, as well as many nieces and nephews. Russ was proceeded in death by his youngest brother Bradley and his parents.

After a tough battle with metastatic cancer, Russ died on March 5th, 2022 at home with his loved ones. Russ started on hospice on November 19th and remained at home with family and the wonderful care of Mayo hospice until his death.

The live stream link below is a complimentary service provided by St. Peter Funeral Home.

To order memorial trees or send flowers to the family in memory of Russell "Russ" Gregory Serbus, please visit our flower store.