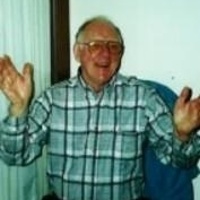 Stanley Martin Davis, the beloved patriarch of the Davis family passed away at the age of 100 years and eight months on Saturday, July 27, 2019 in Plymouth, MN. Memorial service will be at 11 a.m., on Thursday, August 1, 2019 at the Holy Communion Episcopal Church, Saint Peter, with visitation from 9 a.m.-11 a.m. at the church as well. Burial will take place at Greenhill Cemetery, Saint Peter.

Stan was born on November 26, 1918 to Allen and Mary Alvina (Hahn) Davis on a farm outside St. Peter where he lived with his parents and two sisters Bernadine (who will be 99 years old on August 28th) and Betty.

When Stan was in grade school, the family moved into town and Stan grew up in St. Peter where he attended St. Peter Central High School. He was Captain of the 1936 football team and enjoyed sports. Also, in 1936 he joined the Army National Guard, serving until 1940. His high school football coach advised him to consider the dairy business, after high school, as it was a solid profession with no layoffs. Stan immediately took his advice and got a job working at the Norseland Creamery with Harvey Parsons who was his mentor.

In August 1940, Stanley married Gloria Norma Johnson of St. Peter, in Estherville, Iowa. The couple moved to Frost, MN where Stanley became the manager/butter maker of the Frost Creamery. Frost was soon to be followed by a stint as a butter maker in Lamesa, Texas for the Henningsen Corporation providing butter for troops fighting the 2nd World War. In 1943, the growing Stan Davis family returned to Minnesota; Stan took a butter maker position at the Noack Co. Creamery in Arlington, MN.

The opportunity to buy his hometown creamery in St. Peter, brought Stanley back to St. Peter. His seamstress Mother (Johnson Overall Factory) and her 2 sisters borrowed Stanley the money for a down payment. That move to St. Peter set in motion a journey of growth and continuous investment in plant, equipment and people throughout the 50’s, 60’s, 70’s and 80’s for Stan and his family.  Besides the purchase of many local area creameries for their milk supply (Bernadotte, Mankato, St. Clair, Pemberton, and, eventually Waldorf) a merger with the Cord’s family Le Sueur Cheese Co. resulted in a greatly expanded market for Stan’s company’s dairy products. Joint ventures with the French company, Bongrain Int’l, and, Wales based Bio-Isolates, put Stan’s business in the International marketplace.

In addition to his business activities Stan was involved in many community and civic endeavors.  He was raised to a Master Mason on May 7, 1940 in Nicollet Lodge AM & FM #54. Upon his passing he was the longest serving member, and, the oldest member in Lodge history. Stan served on the Nicollet County Fair Board, and was a School Board member for the St. Peter School District from 1955-1959.  He was a member of the Board of Directors of the First National Bank Minnesota from December 14, 1973 thru February 11, 1992.

After retiring, Stan enjoyed time spent with family and friends. If you met Stan no matter what the occasion, you quickly became a friend.  He was known for his great stories, jokes and constant pranks that he played on anyone who may have crossed his path. One of his favorite pranks back in the day was to pull the light fuse on the Holiday House in St. Peter while the dining room was full for dinner.  Mr. Martell would then come over the loud speaker to announce to all of the dinner patrons sitting in the dark not to worry, Stan Davis was “in the house.” Often time Stan’s aunts, in-laws and grandchildren were startled to find fake mice in the refrigerator drawers where they would go to grab a pop or on bookshelves, behind pillows on the couch and under the furniture.  Stan’s pranks knew no bounds and if you were on the receiving end of one of them, it was truly an honor. The grandkids were often subjected to his favorite jokes, rhymes and songs while visiting.  “Kasota Will Shine Tonight” was a favorite and he would sing it at every gathering, often after a Manhattan was served. Any guest at Stan and Bunny’s was offered a Manhattan no matter what time of day they might arrive. Stan’s recipe quickly became a favorite of everyone and was appropriately named the “Stanhattan.”Stan also enjoyed fishing, hunting birds, playing Pfeffer and doing yard work of any kind.  Mowing, raking leaves and shoveling the snow were among his favorite hobbies. The yard was always perfectly mowed in the summer, leaves raked and bagged in the fall and the driveway and walks shoveled at the first sign of snow in the winter.

He was preceded in death by his wife of 41 years Gloria; sister, Betty; son, Thomas Stanley; grandson, Dwight and great-granddaughter, Sara.

The family wishes to thank the Park Nicollet doctors, nurses and hospice staff for the care of Stanley.  Also, the staff of Haven Homecare for their considerable efforts.  Memorials are preferred to the personal charities of the donating party.

To order memorial trees or send flowers to the family in memory of Stanley Martin Davis, please visit our flower store.