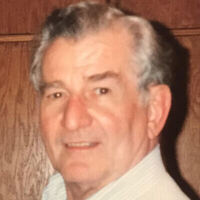 Stanley Leo Muellerleile of St. Peter passed away on Christmas Day, 2020 at the age of 93. Born in Mankato in 1927 to Hazel (nee Egli) and Leo, Stan’s father was killed in a motor vehicle accident when Stan was an infant. His greatest pride was being the type of father he always wished he had.

Stan enlisted in the Navy in 1945, immediately after graduating from St. Peter High School. He was stationed for a short time as part of the occupation force in Japan. Stan met his future bride, Mary Shewchuk, in 1948 when she was an affiliate student nurse at St. Peter State Hospital. They wed in 1949, and remained devoted to each other until his death.

Stan’s family was the joy of his life.

He was a legend in wholesale merchandise sales, beginning his career at Johnson & Co. in St. Peter in 1946 as a stock boy and working up to Sales Manager. Stan continued as a manufacturer’s rep for several national lines until his reluctant retirement well into his 80s.

Stan was an avid pheasant and waterfowl hunter. He was a member of the St. Peter Catholic Church, the Knights of Columbus (4th Degree), VFW and American Legion. He was one of the earliest members of the St. Peter Drum and Bugle Corps which eventually became the Govenaires.

A celebration of life will be held at a later date. In lieu of flowers, contributions would be appreciated to Disabled American Veterans (www.DAV.org).

To order memorial trees or send flowers to the family in memory of Stanley Leo Muellerleile, please visit our flower store.