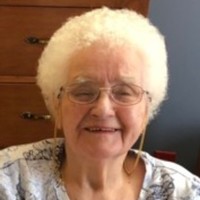 Herta A. Jaster, age 98 of St. Peter, passed away on Wednesday, September 4, 2019, at the Benedictine Living Community.

Funeral service is 11:00 am on Monday, September 9, 2019, at St. Peter Ev. Lutheran in St. Peter with visitation one hour prior. Condolences for the family can be left at www.saintpeterfuneralhome.com.

Herta Amanda was born January 22, 1921, in Laegerdorf, Germany, to Herman and Amanda (Suhr) Wiese. At the age of 14, she went to work on a farm and worked at several farms until she was married.  On January 21, 1949, she was united in marriage to Karl Jaster. They immigrated to the United States on April 13, 1952.  She was a homemaker and later worked at the St. Peter Community Health Care Center, retiring in 1985.  She was an active member of St. Peter Ev. Lutheran Church, serving on the Ladies Aid as well as assisting with Little Lambs. Herta also helped with the senior dining program and was named Nicollet County's Outstanding Senior Citizen in 1991. Herta loved gardening, baking, cooking, crocheting and spending time with family.  She was a caring and loving person and always had a smile and willing to lend a helping hand.

She was preceded in death by her husband Karl in 1978; sons-in-law: Ronald Fisher and Thomas Hicks; and four sisters.

To order memorial trees or send flowers to the family in memory of Herta A. Jaster, please visit our flower store.